On last week’s drive to Vermont, Google insisted we drive through the Adirondack Mountains.  Who am I to argue with Google?  Pretty stuff, but it rendered us a bit car-sick with all the twists and turns.  Along the way, baby Katt learned a new word – FLOWERS, which she now says at every opportunity.

In Burlington, we went to K-art.  We didn’t buy much of anything artistic, just diapers and dish washing detergent.

I was too cheap to rent bikes in Burlington, so the kids spent many hours rollerblading along Lake Champlain.  I attempted to keep up while pushing Katt in the stroller.  It was the first time in my life I’ve ever jogged.  Let me tell you, jogging blows!

Along the path I saw raspberry-like fruit growing out of control.  I wasn’t sure if they were poisonous or safe, so I only ate a few.  They were strangely fuzzy, sort of like eating sweet tart cotton balls.  I lived, so next time I’ll gorge myself!

Zach obtained a busking permit and played some Tango, Klezmer, Irish fiddle, and Old-time fiddle on the streets of Burlington.  He made almost 20 bucks for his 30-40 minutes of effort. 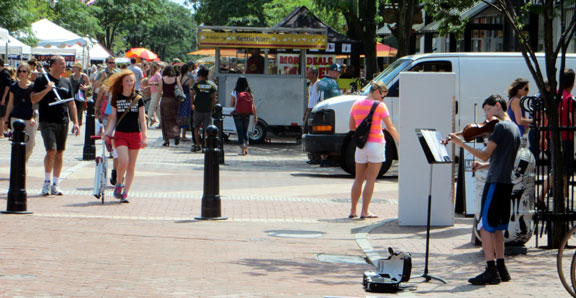