No safety net on the ring of death 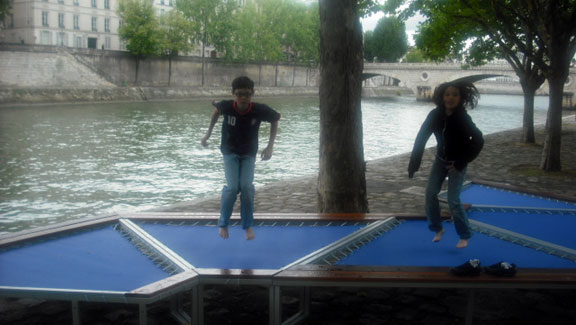 Here are my kids jumping on trampolines next to the Seine River.  What would stop them from having a misstep and plunging 20 feet below into the river?  Nothing.  Let it be known that Paris is no place for American helicopter moms and their sheltered children.

One day I witnessed the spectacular, cringe-worthy, sometimes bloody wipe-outs of neighborhood child-gladiators risking their lives on “the ring of death”.  The circular apparatus tilts 20 degrees and spins on several hundred ball bearings.  Here are my kids enjoying the gizmo: 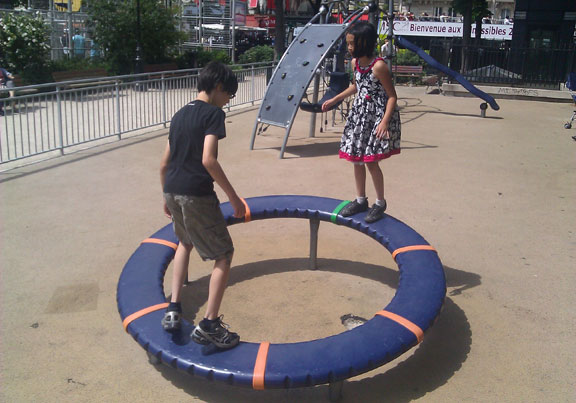 Ten kids jump on.  Zach and Asia jump off.  Zach continues to monitor the situation at a safe distance. 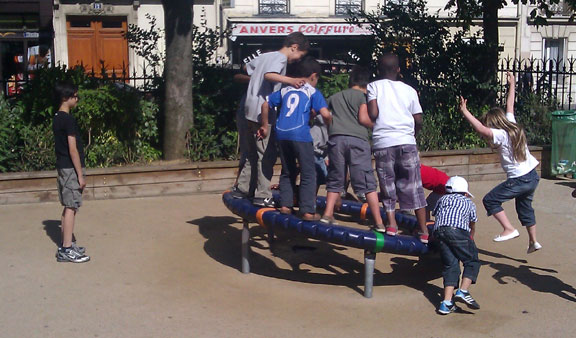 And down they go.  Meanwhile Zach continues to monitor the situation. 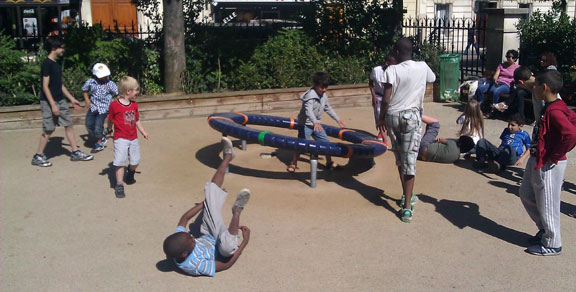 I’m back in America.  31 days in Paris was enough.  Here’s what I will miss/not miss:

Miss:  Seeing people riding bikes.  Bikes were a major mode of transportation.  Helping things along was a fleet of 20,600 rental fixies spread throughout the city, a bargain at $1.43/hour.

Not miss:  Looking at those stupid bikes for a whole month, knowing I couldn’t ride them.  The automated system accepts European “smart” cards, not our dumb American credit cards.  Fail!

Not miss:  Paying $22/gallon for this juice.

Miss:  The parks.  Small neighborhood parks on a weekday afternoon hosted 100-200 kids and adults.  Children from a rainbow of races harmoniously exploited 10-30 foot slides, zip lines, and a refreshingly dangerous giant pyramid.  Ignoring all of this were gabbing parents and nannies, sitting in the cool breeze under shade trees while teens/tweens played soccer and ping pong.  Too cool for this mundane action, old men played petanque (bocce) in the far corner of the park.  A modern Leave it to Beaver scene.  Who would have guessed?

Not miss:  Staring at the built-in foosball tables.  No one in Paris seems to know where to buy a foosball.

Miss:  The pastries.  They lived up to their hype.

Not miss:  The rest of the food.  I’m serious!  As a foodie of sorts, it is my opinion that “classic” Parisian cooking is a hoax.  Virtually every restaurant served the same eight nasty dishes.  Beef tartare?  That’s raw hamburger!  Andouillette?  That’s chitlins!  Tartine?  An open faced grilled cheese sandwich.  Oh, and don’t forget the endless parade of leathery steaks.  Over the course of the month, I had ONE satisfying meal!  Seriously Paris, wtf?

Every day we go to the park.  Sometimes we go to the grand showpiece parks.  But mostly we do our loitering at one of the four nearby parks.  Each park is awesome for different reasons, but they all have one thing in common: ping pong! 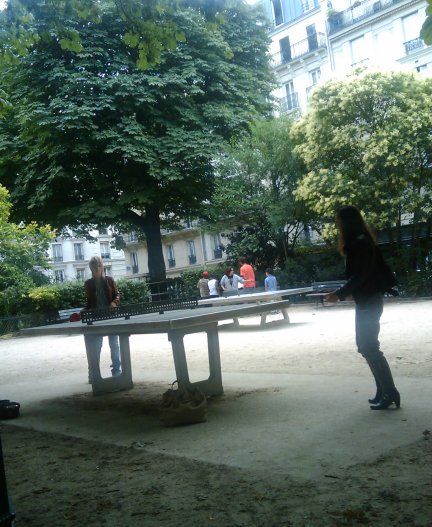 Although the cell phone pic makes the girl on the left looks like she’s got a bad 80’s doo, she in fact had an awesome ’77 punk rock doo.  Notice the boots being worn by the girl on the right.  In the background a tween boy strums Nirvana’s “Come as you are” on an acoustic guitar. 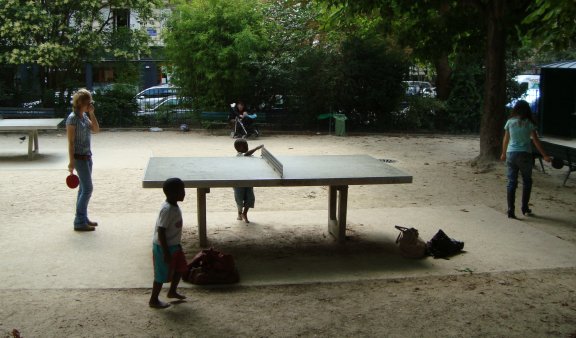 Well, no doubt I missed the moment.  The punky girls were playing some serious ping-pong while the little African-Franco boys were cheering them on.  If I had captured it, it would sum up my impression of Paris:  In Paris, there is a place for everyone.  (As long as you speak French.) 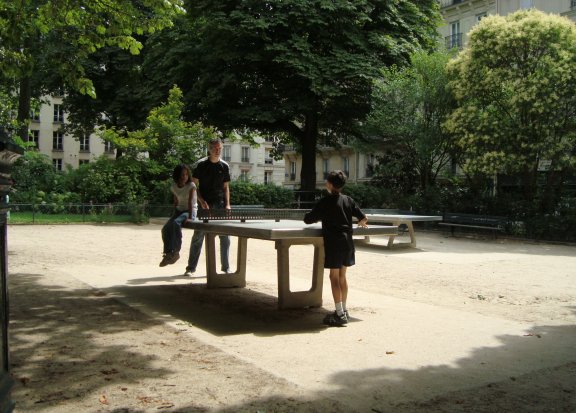