Dude, everyone is soooo done with New York.

Last month I accepted my last rental dollar from Shut-In.  To celebrate/mourn the loss of Pittsburgh’s friendliest agoraphobe, we dined at Pho Minh.  Awaiting S.I.’s arrival, I surveyed the neighborhood’s general state of decay.  Plastered with hipster art/music advertising, the adjacent edifice appeared fit for neither habitation nor commerce.  Pondering this catalogical dilemma, I spied a hot babe unlocking the building.  “Would you like a sneak peek?”, she asked, “The gallery crawl is tonight.”  “Uh, ok”, I nodded with bovine acceptance.  After a minute of inspecting my inspection, it occurred to her that a loitering middle aged white man = perv, and that it might be wise to move me along.  Safely outside the building, H.B. resumed her sales pitch.  “20-30 storefront galleries participate in the crawl.  Some even have live music.”  Just then Shut-In arrived, leaving me to file the episode under “hmmmmm”.

Several weeks later I found myself in Burlington, Vermont, on the 2nd floor of a hipster boutique trying on $40 t-shirts.  The gentleman behind the counter lit up when he heard I was from Pittsburgh.  “Shit man”, he raved, “half my friends are moving to Pittsburgh.  The art scene there is exploding.  Pittsburgh and Miami are hot RIGHT NOW.  Dude, everyone is soooo done with New York.”  “Uh, huh”, I nodded.

So there’s that.  More hmmmm I suppose.  For what it’s worth, here in Paris (yeah I said here in Paris), no one seems to be talking about Peetsboorg.

Santas and the hipster question.

Imagine shopping downtown at Macy’s and seeing this: 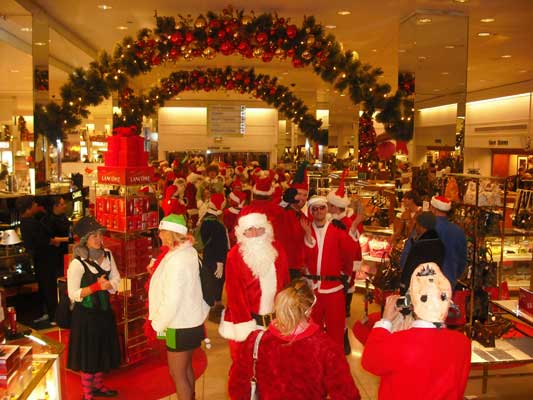 As you can see, Pittsburgh Santarchy ’08 was some good times.

Something random:  Seventeen years ago I was flipping through a friend’s photos when this caught my eye…

Is that a vintage hipster or what?  It got me thinkin…what happens to hipsters when they start to prune?  At what point does the hipster flame cease to flicker?  My friend explained that the floating-head-dude was in fact her grandfather.  With much urgency, I dragged her across town for an interview with the oldtimer.  Several minutes into the muted conversation, Grandpa looked weak, so I let the matter rest.  Four days later I found myself attending his funeral.  The hipster question remains unanswered.