If you want to meet a Craigslist Character, give something away for free.  It doesn’t matter what you are offering.  The more useless the item, the bigger the character you will net.

One day I offered some free bricks.  Not good ones.  Actually they had little possible use.  A single freeze/thaw cycle would have reduced them to pixie dust.  But like I said they were free.

Looking and sounding like a poor man’s Larry David, I knew instantly that I was in the presence of a Craigslist Character.  He was the youngest of 13 Jewish children.  Keep in mind that a true Craigslist Character will always tell you their life’s story.  Larry David had just turned 55, and had recently purchased his 1st house.  “It’s a castle, turret and all.  And I only paid $30,000 for it”, Larry beamed.  Such is the real estate market in Pittsburgh.  During the brick loading, he raved endlessly about the structure.  “You just HAVE to see the place”, he pleaded.

Against my better judgement, I agreed to see Larry’s so-called castle.  Operating under the assumption that Larry was a mass murderer, my plan was to stay between Larry and an exit door at all times.  But as Mike Tyson once famously said, “Everyone has a plan until they get punched in the face.”  In my case, the punch came in the form of an overwhelming stench of rotting flesh.  As my brain began to spin, Larry reassured me, “Oh, don’t mind the smell, when I bought the place out of foreclosure, there were 10 dead cats lying about.”

In the end I toured the whole place.  I even tempted fate by checking out the basement and the inside of the turret.  Your imagination won’t be too far off as to what wonders I saw in Larry David’s castle.

Perhaps tomorrow I will tell you about another Craigslist Character.  Here’s a Google street view of Larry David’s castle: 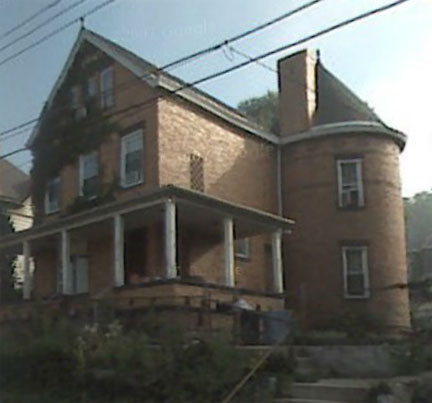