The kids are back in school, so it’s back to “work” for me.  This year I will be making some improvements to the basement.  Nothing fancy, just a recording studio, a game room, a place to work out, a movie theater, a laundry room and a bathroom with a Jacuzzi.  But before any of that can happen, I have to raise the boiler pipes so that they are no longer at (my) eye level.  What good is any of that bling if pipes be wackin’ me in the forehead?  No doubt the short man who built this place back in ’33 didn’t consider these things.  Probably all he was thinking about was why on earth was he building a giant house in the middle of the great depression.

The problem with performing major surgery on a boiler system is that while you are working on the boiler system, it follows that you cannot use the boiler system.  With Old Man Winter just around the corner, this pipe-raising business is not a job with which I may dilly-dally.  The situation is serious enough that I WORKED last Saturday.  The Jews are totally on to something because let me tell you I had no fun WORKING on a Saturday.  But you know what is way less fun than WORKING on the Sabbath?  Freezing to death, that’s what.

Well, here’s a picture of my new office for the next 8 months.  In a week or so, the pile of copper pipes should be gone, at which point I can quit worrying about frostbite.  Tonight it’s supposed to get down to 45 degrees.  Yowzers! 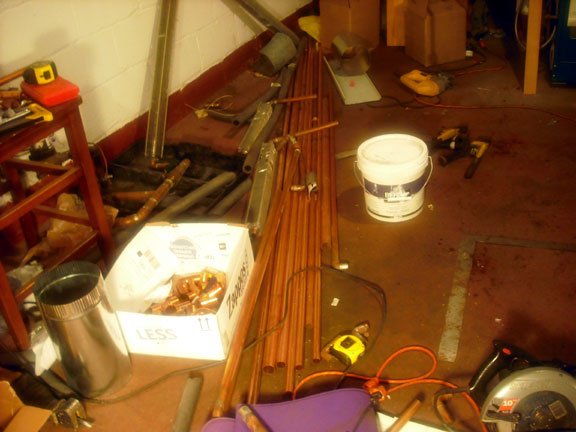