not such a slacker after all…

I married an understanding woman.  One day I got it into my head that I wanted a 6 foot Jacuzzi and a walk-in cedar closet.  So I tore up the bedroom and went to work.  Elise works from home.  It didn’t occur to me that a woman might not enjoy sleeping in her office, on a futon during her 3rd trimester of pregnancy.

A lesson learned?  No.  When we moved to Pittsburgh, I bought a one bathroom house.  I remember declaring in a pompous, cavalier voice, “I shall build a 2nd bathroom!”.  And so I did.  The demolition went smoothly.  (That part always does.)  But there were problems.  Since a bathroom was being carved out of our bedroom, we had to sleep amid construction filth.  Making matters worse, I rarely had time to work on the project.  Hoping to speed things along, I tried to hire a contractor to do the rough plumbing – a hole in the ground for poop to travel.  Three quotes came in, all at around $5000.  Holy crap.  $5000 for a hole in the ground?  As the Puerto Rican kids used to say 10 years ago, HELLS NO.  I’ll decided to do it myself.

And that’s why it took me an entire year to build a friggin bathroom, while sleeping in a dusty, filthy room.  Here’s the finished product:

Ahhh, but I’m just getting started.  I’m gonna rip up that room again.  I’m building the mother of all entertainment centers into the wall.  Basically, I’m making built-in book cases with a spot for a giant TV in the middle.  I’m wiser now, so I’ve planned out better sleeping arrangements.  Zach has a bunk bed, so both kids can share his room.  For the last two weeks, I’ve rehabbed our ex-nanny’s room.  (Soon to be Asia’s room.)  That will be me and the Mrs.’s room until I finish the entertainment mecca.  Here are the before and afters of Asia’s new room:

I feel much better after writing this.  Maybe I’m not such a slacker after all.  One more thing.  Here’s a picture of the house.  It will help explain why I bought a house with one bathroom: 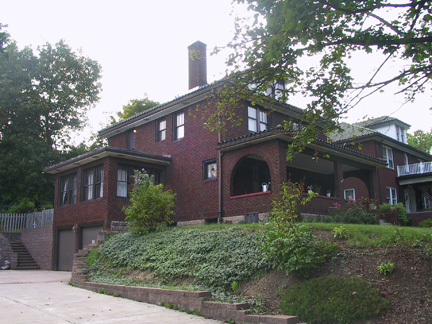