Oh crap. I got a Mr. Wallace yard

In a school I once taught at, there was a sub named Mr. Wallace.  He was a little eccentric.  Actually he was a lot eccentric.  In 1976, when everyone was evacuating the city of Chicago, Mr. Wallace felt it would be a good time to purchase a home.  He paid approx. $6000 for a “rowhouse” several blocks from the Taylor St. housing projects.  Turned out to be a wise move.  It’s would now fetch at least $600,000.  The building itself is worth negative $8000, which is how much it would cost to knock it down.  Location, location, location.  Expensive dirt.  With a gleam in his eye, he will point out the myriad of “improvements” he has made to his house – all with shizz he picked out of the trash.  Then there’s the front yard.  He’s got a vegetable garden growing out front.  Squash, corn, cherry tomatoes, and an apple tree, all nicely framed with borders made out of more shit he picked out of the trash.

So there’s this odd plant growing in my front yard.  I didn’t plant it.  Elise sometimes has peculiar taste in plants, so I assumed she had planted it.  It matched nothing, but not wanting a fight with Mrs. Neill, I let it grow.  Later I found out no one planted it.  Turns out its corn.  Yeah, the kind you eat.  I’ll tell you how it tastes in about a week. 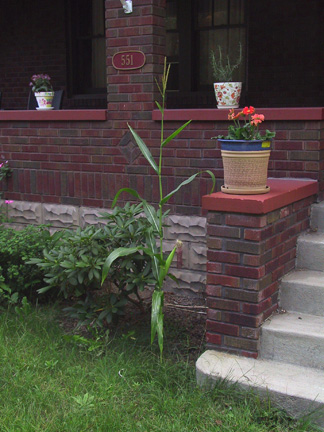